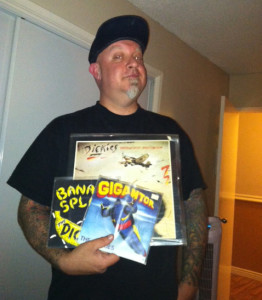 I’m trying to get anyone to agree, I’m just saying, in my world this is THE album for me! I have seen the Dickies more times than any other band too. It’s time I chose a favorite album. I’ve seen a lot, I’ve heard a lot. I have earned this choice!

Let’s start with “Pretty Please Me.” For starters, this song has the best bass line I’ve ever heard. Second, the drum break in it rules! The lyrics, vocal melody and harmonies are like The Beatles meets the Beach Boys with grit! Stan Lee’s guitar riffs are so melodic and musical it makes me wanna air guitar as much as any Metallica or Slayer song.

“Wagon Train” is like a Johnny Cash hit with a futuristic cartoon character on a chain gang getting ready to jump into land speeder and go meet up with the Ramones in heaven.

If you’re gonna name your dick, of course name it Stuart. And if Stuart could talk, what would he say? He’d say, stop jerking off and “annoying me with your hand.” The best breakdown in any punk song complete with piano thingies! Leonard’s voice is so good. From the first time I heard this song I’ve been trying to sing this good. And yes, I’m listening to it as I write.

“Rosemary” is THE template for all pop punk songs that have been written since (whether the bands that followed knew or not). A lot of bands have no idea who The Dickies even are. But, I guarantee that Descendents, NOFX and the Dead Milkmen know. I’m sure Blink 182 knows too. The Ramones and the Dickies were happening at the same time. I’m sure they would all give them props.

“Out of Sight, Out of Mind” has some of the best backing vocals I’ve ever heard. Not to mention the lead vox are perfect and awesome. This song relaxes me and comforts me in troubled times.

To round it all off they cover a Led Zeppelin song, “Commination Breakdown.” Funny story, when I was in High School and heard this song on this record, didn’t even know it was a Zep song. Thought The Dickies wrote it. Sorry Zep guys, Leonard and Stan do it better. That’s saying something.