So as you might know, this website, slash blog, slash classic punk story tellin arena is the love child of Mr Jonas Kleiner. He is the guitar axe slayer of our 90’s ska punk band Buck-O-Nine. He is also my songwriting partner extraordinaire and best buddy, along with five other Buck-O-Nine originals! 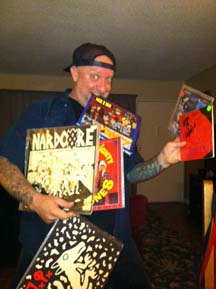 I am the humble and sometimes drunken front-man, Jon Pebsworth. My friends call me Pebs. Jonas asked me to join him in this fun, fan based quest to talk about, write about and remember where we came from website a few months ago. I jumped at the chance to do something with Jonas and write some stuff about what I love. He once told me, Pebs, you should write a book about your life and your crazy life experiences (good, bad, ugly & rad). He said, “Dude, you have been down, you’ve been out, you’ve written some great songs, you’ve loved, you’ve lost, you’ve seen the world and made a million friends. Real friends. And, you’re still rockin like a teenager!”

I have thought about his idea alot over the years and… shit, maybe someday I will.

For now I am excited about writing for Jonas’ website. This isn’t a place for journalism or rock and roll media promotion. We might spell some works wrong or make “run-on sentences” or whatever. But, that shit don’t matter. This is a fan site. And as fans of old Punk Rock and Ska, we gonna have some fun with this shit busta! We’re only going to write about what we love and want to talk about. Whether it’s an old album or something happening now, don’t matter. We’re not here to talk shit.

Our band, Buck-O-Nine started in 1991 in San Diego. At the time there was alot going on. We somehow found each other and quickly realized that playing ska and punk in one band is the coolest combo there could possible be. The Clash did it. The Specials did it and at that time, The Mighty BossTones and Operation Ivy were DOING IT! The Two-Tone era was basically taking Traditional Ska and mixing it with Punk Rock at the time, ala Buzzcocks, Sex Pistols, The Clash. Genius!!! Traditional ska was so good with Desmond Dekkar, Toots, Marley and Skatilites. Fuckin mix that with a little punk and you are Two-Tone!!

Anyway, we love this music and will always love it. We grew up on So cal punk for the most part and loved all ska music too. As far as I’m concerned Punk and Ska go hand and hand. So what we did with ska in the early 90’s was the same as what the Two-Tone guys did in the 80’s. They called us the “Third Wave.” I hear there are bands gearing up for the 4th Wave of Ska (Check out the Oceanside Sound System). **One side note is that fuckin FISHBONE was the bridge between the Two-Tone era/2nd Wave and Third wave of ska. and they are Punk as FUCK! Love ya Norwood & Angelo. Without them, there would be no future.

So, this month, me and Jonas have interviews with Steve Soto from Adolescents, Jimmy from Pennywise/The Black Pacific and album reviews of The Dickies classic “Stuckas Over Disneyland” and the Misfits “Walk Among Us.” Stay tuned if ya like!

In the great works of Chuck Bukowski in his screen write of the classic, ‘Barfly’…. TO ALL MY FRIENDS!!!