Well slap me silly, the new BAD RELIGION is fucking awesome! I have it on endless loop! I have been a fan for most of my life but gotta say this new one is one of their best! BR always puts out good records but the bar they set for themselves with SUFFER, NO CONTROL & AGAINST THE GRAIN is the only way to gauge anything after. Bad Religion’s worst album would be a dream come true for most punk bands out there. It’s not even fair to use the word “worst.” I don’t even know which album that would be. 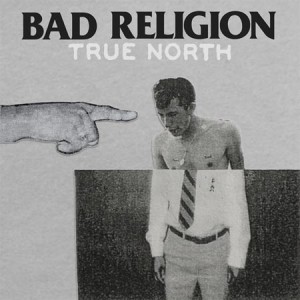 I first heard TRUE NORTH on a drive down to San Diego with my buddy Andy. He was talking it up and comparing it to SUFFER etc. Next thing I know, BAM! Every song is on point. TRUE NORTH has it all… Great songs and lyrics, the drum beats they pretty much started and killer guitar riffs and solos. TRUE NORTH is ALSO the best use of Brian Baker since he has been in the band. Great guitar player. The backing vocals are in classic form too. I love that there is a song called, “FUCK YOU.”

“Dharma and the Bomb” is one of my favorites. Its classic BR mixed with a new flavor. The guitar riff is awesome. This is the song that made me think about how rad Brian Baker is. I also love the way Greg sings this one. His vocals on “Hello Cruel World” are really unique. It feels like he raised his own bar on this album. After 30 years a lot of guys lose their original vibe that made them great and stop inventing new sounds with their voices. Great work here Greg! This reminds me why I loved and still love BAD RELIGION.

“Robin Hood in Reverse” is great too! I love the Sham 69 lyric nod and referencing them by say “there is a brand new Sham today.” Pretty cool. I couldn’t be happier to have this album in my collection. It’s really inspiring to have a band from my youth still cranking out quality shit. I also love that the core original band is still there. Hetson, Jay, Brett, Graffin and add Brian Baker from Minor Threat! Not to mention Brooks is the best BR drummer! Great work guys, see you at the next show!